How to feel safer on your bike

These are must-have skills before you go riding in traffic. Find somewhere nearby where you can ride without worrying about other vehicles so you can master the essentials – parks, trails, and quiet streets are ideal.

Whenever you are riding on a road where there isn’t any cycling infrastructure, you should be thinking about your position on the road. The most important thing here is that you should never put yourself in danger out of fear of slowing somebody up. Whilst it might not feel like it sometimes, you have just as much right to be on the road as any other road user.

There are two main positions that you ride in whilst cycling: Primary Position and Secondary Position.

Primary position is sometimes called ‘taking the lane’ because you’re doing exactly that - you’re riding with the flow of traffic in the middle of the lane. Whilst this might seem either scary or inconsiderate, it’s actually the safest position for you to be in on the road. This is because you’re more visible and cars are less likely to risk trying to overtake you when it isn’t safe to do so. It’s good to think of the primary position as your default place on the road, and you decide when to move into a secondary position.

The secondary position is further over towards the side of the road - about 1m/3ft away from the pavement. The benefit of taking a secondary position is pretty clear; it allows cars to overtake you more easily so you don’t hold faster road users up. But it’s crucial that YOU decide to take this position when you feel it’s safe to do so. Examples of when NOT to use the secondary position would be if there's a sea of parked cars that could put you in the door zone (see below) or if you were riding on particularly narrow roads.

In general it’s also best to adopt the primary position whenever you’re approaching a junction, a roundabout, or if you are riding in a lane that isn’t closest to the pavement. If you want to be a considerate cyclist (and we hope you do!) then it’s best to move into the secondary position as often as you can, but don’t forget, it’s YOU who makes the decision that it’s safe to do so! 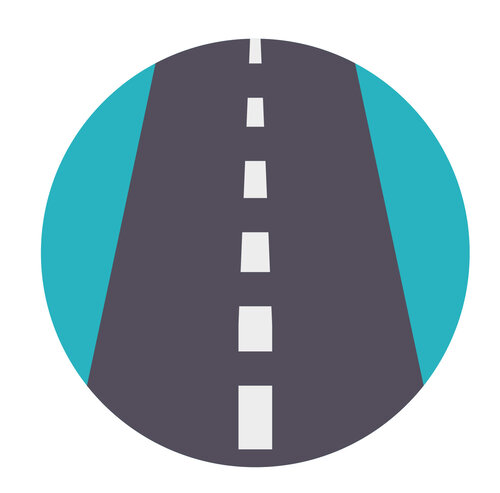 You can read more about Primary vs Secondary position here.

The door zone is the area immediately next to a row of parked cars. Unfortunately, not a lot of people look properly before opening their car door. This means that if you are riding in the space where that door would open, you run the risk of a nasty surprise. Riding at least 1m/4ft away from the parked cars will reduce the risk of this happening.

Get used to your gears

Unless you're lucky enough to live somewhere that's pancake flat, being able to use your gears effectively will help you get from A to B without too much huffing and puffing. Before you start mixing it with traffic, get to grips with how your gears shift and work out what gears work best for your legs: try climbing, descending, and cruising on a flat section. Are you a spinner or a slow turner? Everyone has his or her ideal rhythm (or cadence) so take the time to find out what suits you.

Be aware and signal safe

Be attentive to what's around you, as well as what's in front of you. Knowing what's behind you means you can make informed decisions to keep yourself safe and be courteous to other road users. Being attentive is extra valuable in case another road user isn't for some reason (say, they're distracted for a moment by something).

Make sure your intentions are crystal clear to other road users: signal early and decisively. Don't hold back from taking control of a situation if it means you will be safer. Remember that signalling with your hands is both a turn signal and a brake light for you, so it's extra important when riding in traffic. A quick hand out to the left or right will do wonders to help you effectively communicate your intentions and ride more safely!