23/07/20, London, UK. Latest YouGov research shows the public is overwhelmingly in favour of measures to encourage walking and cycling with 6.5 people supporting changes to their local streets for every 1 person against.

It shows that 70% believe more people cycling would reduce traffic congestion across the country and 65% of all Britons - rising to 80% of those with an opinion one way or the other - want to see British roads redesigned and changed to protect cyclists and pedestrians from cars. These responses are a clear indicator that there is overwhelming support across the country to bring about lasting changes to transport infrastructure which can tackle air pollution and climate change, as well as make streets more pleasant places to socialise and shop.

So far, 89 different local authorities have implemented a total of 503 temporary schemes that make more space for pedestrians and cyclists, according to Sustrans. However, vocal residents and pro-motoring groups have been successful in forcing some local authorities to perform U-turns on their initiatives to enable active travel, despite £250m of funding and statutory guidance issued mandating them to make bold changes that challenge the status quo. For example, in Reigate, Surrey, a pop-up cycle lane, due to be trialled for 3 weeks, lasted just 3 days after pressure from local MP Crispin Blunt MP. Other measures due in Ealing, Wandsworth, South Gloucestershire, Trafford, Portsmouth and Surrey have been reportedly cancelled.

Analysis of the YouGov data by Dr Ian Walker, a prominent Environmental Psychologist at the University of Bath, might even shed some light on why decision-makers are so open to heeding the vocal minority. This showed that people were clearly in support of more cycling in the UK, but at the same time they quite consistently overestimated other people’s opposition to this. 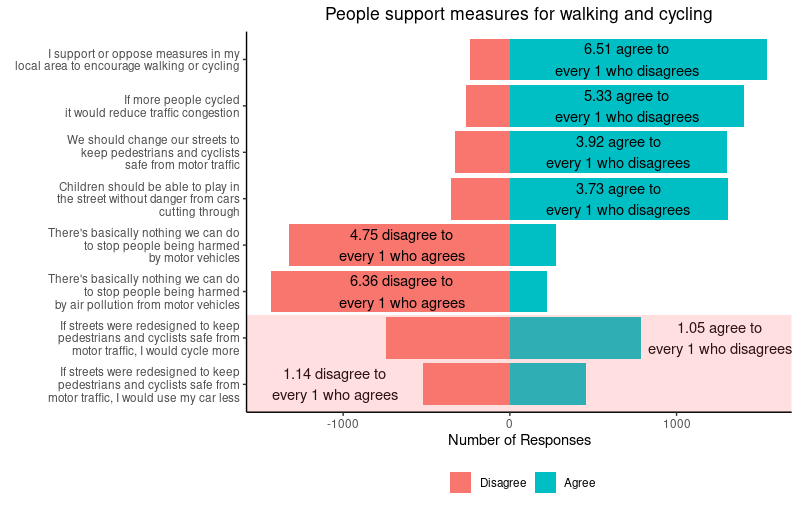 Dr Ian Walker, Environmental Psychologist at the University of Bath, said: “Perhaps one reason negative voices find it so easy to sway things their way is that people have a tendency to misjudge public levels of support. The survey showed that, while most people think Britain would be a better place if more people cycled, they also guessed that other people were less supportive, and more hostile, to the idea than they were.”

The data showed that 3.26 people support the view that “Britain would be better if more people cycled” for every 1 against. But when asked what they thought the opinion of their friends or the general public would be, many respondents drastically overestimated the negativity towards cycling. 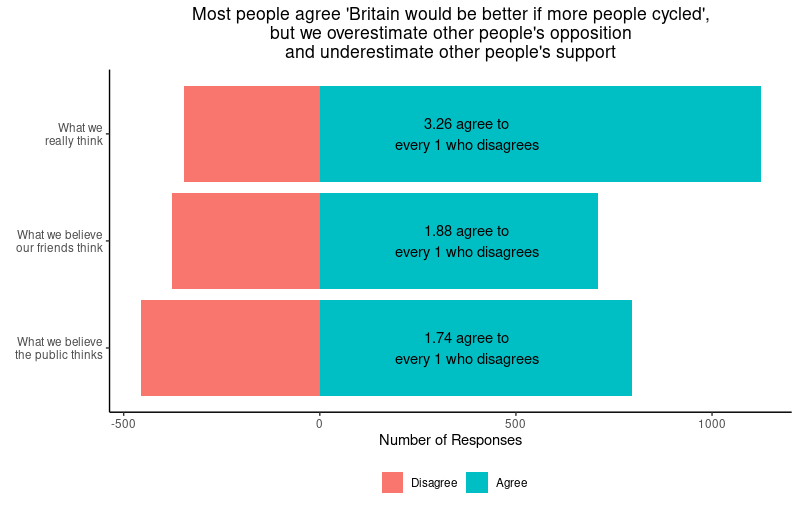 Adam Tranter, a spokesperson for #BikeIsBest and an active travel campaigner, said: “The small minority getting all revved up about their right to drive are having their voices heard through sheer volition. If the silent majority want to see this new, greener, better Britain, they need to act now or face going back to the old normal, with polluted and dangerous streets.

“When 20mph streets were first proposed, pro-motoring groups were whipped up into a frenzy, just as they are today. In 2017, data showed that the proportion opposed or strongly opposed to residential 20mph limits was just 10%. The same is happening here with measures to enable more people to switch their journeys to cycling and walking.”

He added: “No-one is saying that all journeys can be cycled or walked but many of our towns and cities are experiencing congestion - not because of cycle lanes but because of people using their car for short journeys, often under 2 miles. Local authorities need to stand up and refuse to be bullied into a U-turn on plans to turn Britain into a better place. These are plans the public agree with, so people also need to speak up so their silence isn’t taken as consent to keep our streets dominated by motor vehicles.”

To show local authorities the unmet demand for better cycling infrastructure, the #BikeIsBest campaign has set up an online petition for people to show their support for measures to enable cycling.

The petition can be signed at https://www.bikeisbest.com/petition.

Further statistics can be downloaded from here.

All figures, unless otherwise stated, are from YouGov Plc. Total sample size was 2010 adults. Fieldwork was undertaken between 16th - 17th July 2020. The survey was carried out online. The figures have been weighted and are representative of all

20mph source: British Social Attitudes Survey on public support for and opposition to 20mph limits for residential streets from 2004 to 2017 is available here: https://assets.publishing.service.gov.uk/government/uploads/system/uploads/attachment_data/file/724851/att0359.ods

#BikeIsBest has united over 50 leading cycle brands, retailers and organisations into one powerful voice with a single mission - to get more people riding bikes more often.

How cycling can benefit your health