White lines provide instructions which are sometimes misunderstood or ignored. Here’s a guide to what they mean and how to adjust your riding accordingly.

Like road signs, road markings are designed to be easily understood. Road markings will often be your cue to take the lane. You’ll need to make a judgement call in each case - after checking behind, you might feel more confident in the ‘secondary’ position, further to the left than the centre of the lane. Avoid getting too close to the kerb, however, as it will encourage drivers to overtake you when it’s not safe to do so.

A single broken white line simply marks the middle of the road. It doesn’t mean ‘overtake at will’. Drivers are obliged (Highway Code, Rule 163) to give cyclists ‘at least as much room as you would when overtaking a car’. When the broken white lines get longer, with shorter gaps between them, it means there’s a hazard ahead. Be prepared to take the lane.

Where there are double lines in the middle, you ‘MUST NOT cross or straddle’ the solid white line on your side of the road, according to Rule 129.

Careless drivers may interpret this as: ‘You can still overtake cyclists without crossing the solid line, even if it means you nearly hit them.’ Cautious drivers take it to mean: ‘Do not overtake cyclists.’ Neither is correct. Rule 129 goes on to say: ‘You may cross the line if necessary, provided the road is clear, to… overtake a pedal cycle… travelling at 10mph or less.’ With this in mind, you should be prepared to take the lane, to prevent dangerous overtaking. 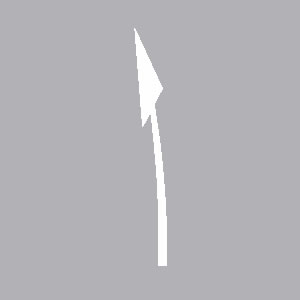 Not to be confused with lane direction arrows, these curved arrows tell overtaking drivers to get back onto their side of the road.

Drivers will sometimes race to get to this point and then swing in rapidly. Once again, be prepared to take the lane, because you’re about to reach a solid-white-line situation.

‘Move left’ arrows are also used on multi-lane roads such as dual carriageways, where the rightmost lane is ending. Traffic may be moving quickly and braking suddenly in this situation, so treat such arrows as a red flag. Stay alert and be prepared to move further left if other road users are behaving recklessly. 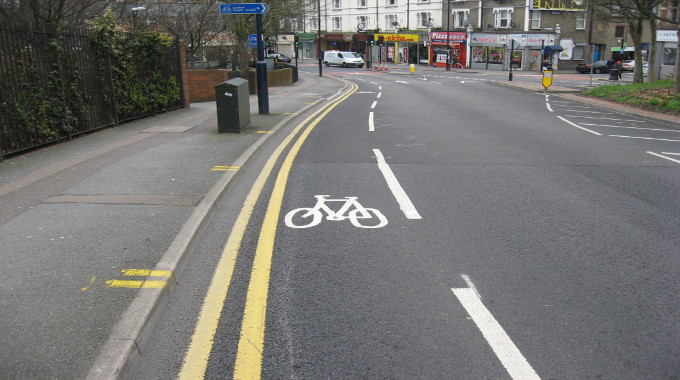 A solid white line at the edge of an on-road cycle lane doesn’t mean you must use it or stay within it. The instruction here is actually for drivers. Rule 140 says: ‘You must not drive or park in a cycle lane marked by a solid white line.’

When it comes to dashed white lines at the edge of a cycle lane, drivers are only allowed to drive or park in within the line if it is ‘unavoidable’. Although quite what constitutes ‘unavoidable’ isn’t spelled out.

Note that on a shared-use path with pedestrians, a solid white centre line is a divider that you’re not meant to cross.

Lines around stripes or chevrons 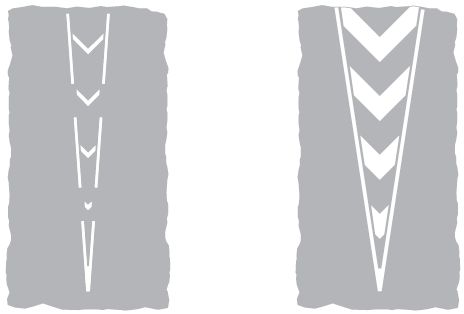 If the area of diagonal strips or chevrons is bordered by a broken white line (like the left image), you can enter it if it’s safe to do so. If the border is a solid white line (right image), you should only enter it in an emergency. This applies to cyclists as well as drivers. 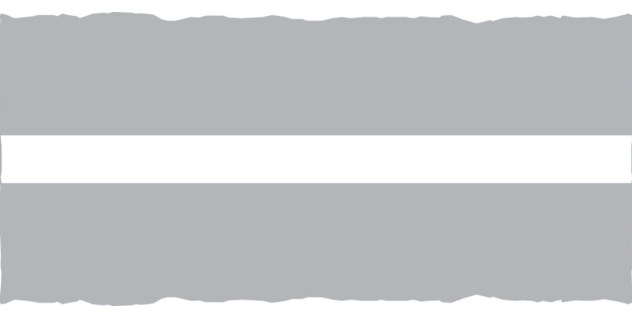 All road users, including cyclists, MUST stop behind this thick solid line, before checking the way is clear and then proceeding. Cyclists aren’t specifically required to put a foot down, but a ‘rolling stop’ (permissible at dashed give way lines) isn’t allowed. 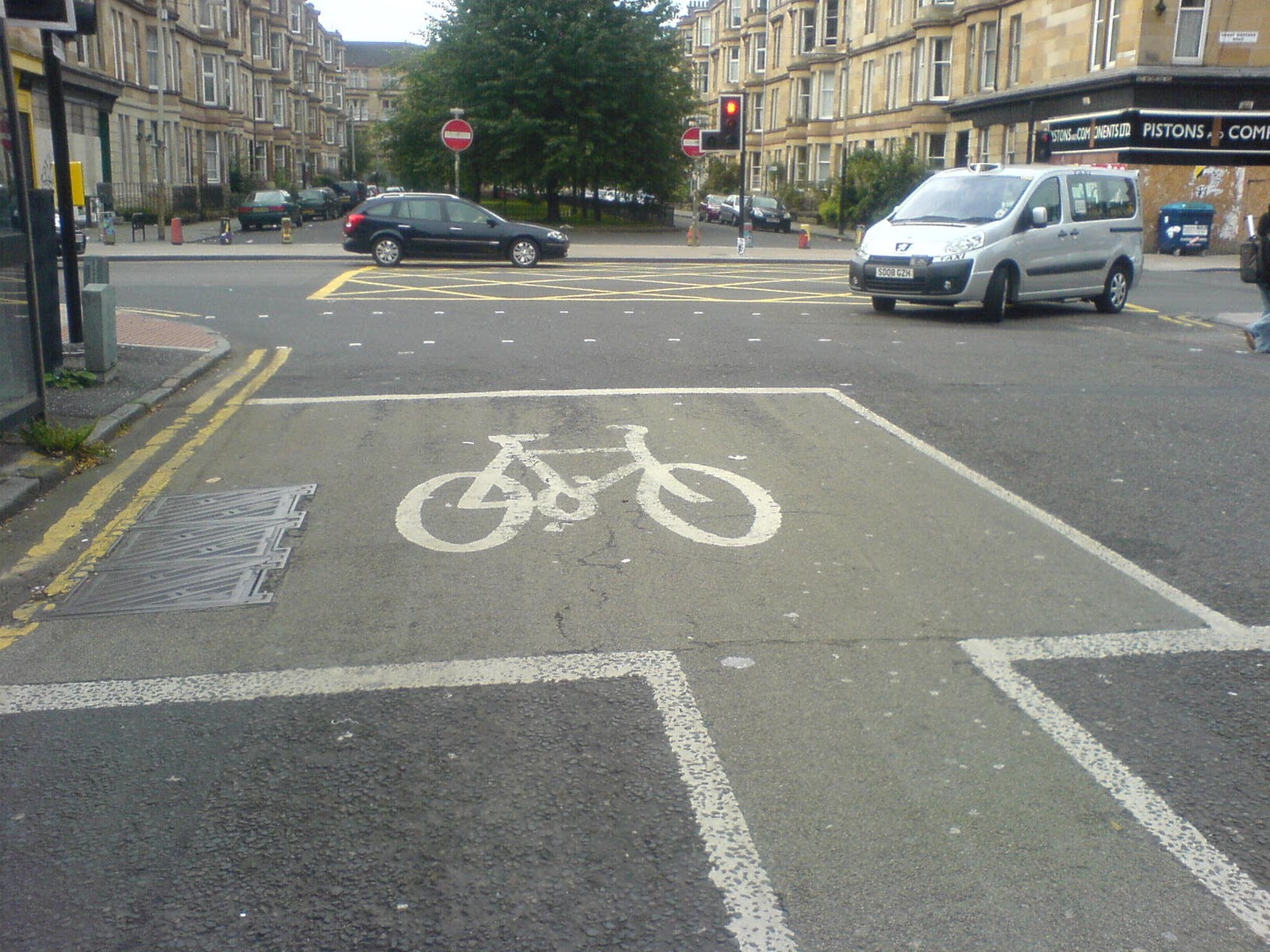 Drivers (and motorcyclists!) are required to stop behind the first solid line, before the box with the painted outline of a bicycle. Cyclists are required to stop before the second line, so that they’re positioned within the box. When you get into the box, take the lane. The Highway Code advises drivers to ‘allow cyclists time and space to move off when the green signal shows’.

Many advanced stop lines (ASLs) have dashed lines that seem to indicate a recommended route into the ASL. You’re not obliged to use this and can cross the drivers’ stop line to enter the ASL. 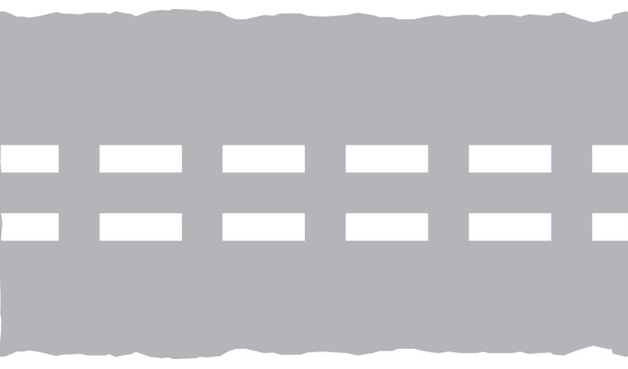 Give way markings are broken white lines at:

Take the lane when you approach give way lines. It will prevent drivers pulling alongside and/or cutting you up.

Note that a rolling stop is permissible at give way lines. You need to slow down and be ready to stop, but it’s okay to keep moving if the way is clear.